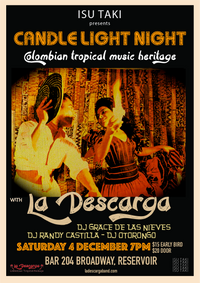 ISU TAKI & La Descarga present: La Noche de las Velitas [Candle Light Night] To the sound of the drums and the rhythms of Afro-Colombian dance this night will heat up your soul.

ISU TAKI & La Descarga have prepared a special night at Bar 204 on Saturday 4 December to gather and celebrate light, romance and remember past times when candles were used to illuminate humanity’s life and celebrations. In Colombian culture (and across Abya Yala), candles have a special meaning. Candle Lights Night (Spanish: La Noche de las Velitas), held on December 7, is one of the most observed traditional holidays in Colombia. On this day, people place candles and paper lanterns on their windows, balconies, porches, sidewalks, streets, parks and squares, in short, everywhere they can be seen. It marks the start of the end of the year celebrations.

During cumbia dance, women playfully wave their long skirts while holding a candle, and men dance behind the women with one hand behind their back and the other hand either holding a hat, putting it on, or taking it off. Candles have been used for more than 5,000 years and we invite you to light another candle, dance and remember. Expect a ritualistic Afro-Colombian rhythmic and dance explosion. La Descarga is a tribute to the music and dance traditions of the Afro-Colombian regions from the Caribbean and Pacific coasts of Colombia.

Light your candle at the Fiesta and start the end-of-year celebrations with us.

And if that's not good enough, ISU TAKI curated a DJ line-up to immerse you deeply into Colombian and South American musical diversity. It will display a selection of mestizo rhythms native to this incredibly beautiful tropical piece of land.

This event takes place on the stolen land of the Wurundjeri people of the Kulin Nation. ISU TAKI & La Descarga respectfully acknowledges elders past, present and emerging. We acknowledge ancient knowledge not only from Kuli Nation, but all across both continents: Australia and Abya Yala. Always was, always will be.